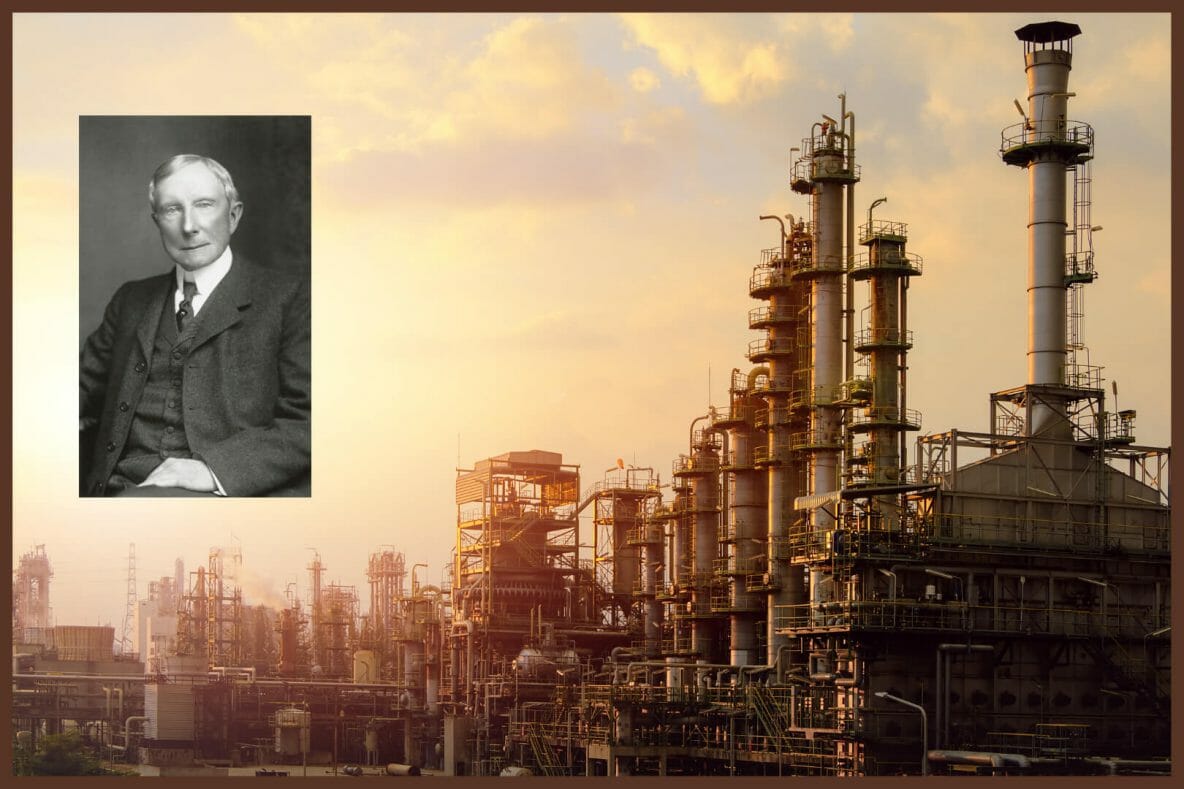 Did you know that oil tycoon and business magnate John D. Rockefeller helped to remove “holistic” and “alternative” plant medicines from the teachings of medical professionals in the United States? That’s right! Most well-known for his career in big oil and the petroleum sector, Rockefeller, at the time of his death, was estimated to be worth 300 to 400 billion dollars making him the “richest man in modern history.” Like many people though of the time, his influence on medicine has had detrimental long-term negative effects on society as a whole.

Another name that may come to mind when it comes to their agenda affecting the health of millions is a man by the name of Harry J. Anslinger, who is primarily responsible for the prohibition’ against cannabis that still holds precedence in federal law in the United States of America. That, however, is an entirely different story. One that, like the story of Rockefeller, was one of private agendas and greed.

From Oil Tycoon to Medical Influence, Rockefeller was in the Business of Monopolizing

Thanks to various ventures over the years, by the early 1900s, John D. Rockefeller gained control of over 90% of oil refineries in the United States through the Standard Oil Corporation. During the same time period, the science community was fascinated by the potential offered through petrochemicals produced by the petroleum industry, such as the ones that Rockefeller owned.

Curious what a petrochemical is? In the simplest of terms, petrochemicals are any substance or product that originates from natural gas or petroleum. Petrochemicals consist of oils such as mineral oil, commonly utilized in Vaseline and lip balm products, and surfactants which are found in creams, shampoos, and cleaning products. Surfactants are known to be very penetrating and potentially carcinogenic.

While some of the first products produced from petrochemicals were plastics, scientists knew that their potential went much further. Coincidentally during the same time, the discovery of essential vitamins such as vitamin C, vitamin A, vitamin D, vitamin B1, and B2, along with others and how they work with the basic mechanics of our anatomy, were being discovered and, of course, there was much research focused on recreating synthetic lab versions of these vitamins. This is where Rockefeller saw great potential to utilize his position as an oil tycoon and petroleum monopoly owner to venture into other industries, such as the medical sector.

This was early in American history, and at the time, herbal and natural medicines such as essential oils, aromatherapy, and others were highly popular, which hampered Rockefeller’s plans. This is where Rockefeller went from Just being renowned for his work in the oil sector to venturing into the medical industry through the purchase of a German pharmaceutical company. Once he had ventured into the medical sector, it opened up doors to continue with his plan to not only monopolize the petroleum sector but to capitalize on medicine.

In 1910, The Rockefeller Foundation, along with the Carnegie Foundation for the Advancement of Teaching in New York City, helped to fund the Flexner Report of 1910, which was authored by a man named Abraham Flexner. Flexner was commissioned by the council on medical education, which was created by the American Medical Association. The intentions of this report were to help evaluate and potentially restructure medical education in the United States, and that’s exactly what it did.

During this time, therapies such as homeopathy, herbal medicine, essential oils, chiropractic, and naturopathy were commonplace. The 1910 Flexner report concluded that these natural healing modalities were “unscientific quackery.” This report also concluded that there were too many medical schools as well as too many doctors in America and called for the standardization of medical education. Of course, this was with underlying intentions being that the American Medical Association would be the only entity that could approve medical school licensure in America.

After its publication, Congress implemented changes based on Flexner’s recommendations which led to modern allopathic medicine becoming the standard despite the quite barbaric methods of the time. This was when Rockefeller worked with Andrew Carnegie to provide funding for medical schools across the country. This was with the condition, of course, that they only taught allopathic medicine, and they were offered grants of significant proportions in order to adhere to these conditions. Through these grants, primarily fueled by Rockefeller’s petroleum monopoly, helped to systematically remove any mention of plant-based natural treatments along with teachings on nutrition and diet from medical education curricula. Supported by Rockefeller’s influence on the media of the time, homeopathic and natural medicines were quickly discredited and demonized through targeted media campaigns.

By now, we’re painting a pretty good picture of how Rockefeller advanced to drastically influencing modern medicine. Many are also unfamiliar with the fact that John D. Rockefeller also helped to fund the American Cancer Society in 1913. Did you know that under federal law, it is actually illegal to utilize any modality other than chemotherapy, radiation, or surgery in the treatment of cancer? It’s easy to see why if you follow the money considering that the average cost of cancer treatment in the United States is a minimum of $150,000.

So, at this point in time, Rockefeller owned 90% of the oil refineries in the United States, had founded medical societies, and helped to completely remove natural remedies from medical education in the country. This opened many doors for a monopoly surrounding petrochemicals that none other than John D. Rockefeller had control of. Did you know that petrochemicals are utilized to manufacture everything from antibiotics, antibacterial products, analgesics, rectal suppositories, cough syrups, lubricants, and even the majority of topical ointments, salves, creams, and gels?

For centuries, cultures around the world have utilized homeopathic medicines, including essential oils, chiropractic therapies, and others, with great efficiency and little to no side effects. Something that can not be said about modern modalities. Modern medicine and John D Rockefeller’s support of the 1910 Flexner Report, as well as its influence on helping to shift medicine away from natural therapies, has done and continues to cause detrimental harm.

The Dangers of Petrochemicals to Our Health and the Environment

Environmental Dangers and Risks of Petrochemicals

Petroleum-derived products have long-lasting and detrimental effects on the environment. These products often find their way to rivers and the ocean, where they are unable to be purified and taint the water with dangerous compounds. The water within oceans and rivers also evaporates and then makes its way back to the ground via precipitation, where the contaminated rainwater makes its way back into the groundwater, and, eventually, the “tap” water consumed by millions around the world. The presence of petrochemicals also contributes to the death of fish and coral reefs in bodies of water globally, ultimately influencing the quality of seafood in our food supply and, in return, our health.

The negative effects petrochemicals have on the environment are not limited to water pollution either. In fact, air contamination has become quite alarming. Petrochemicals that are burned release greenhouse gases such as carbon, nitrogen, sulfur, and ash into the atmosphere, which in turn causes pollution, smog, acid rain, and more. Not to mention they are inhaled in the very air we breathe.

Many of the toxins listed above that are a result of petrochemicals and found in petrochemical-based products also present major risks for our overall health and well-being. Two of the most detrimental routes for harmful synthetic chemicals to enter the body are via skin absorption and inhalation.

When toxins are absorbed through the skin or via inhalation, they are not processed by the digestive system, which has the ability to remove many of these toxins before they are absorbed into our bloodstream. This is not the case when applied topically or when inhaled. This causes an accumulation of toxins, and when they exceed the body’s capability to rid itself of them, it can cause many symptoms and conditions. Some of the adverse effects due to exposure to petrochemicals include but are not limited to the following.

What are the Specific Dangers of Petrochemicals in Skincare and Topical Products?

Petrochemicals in skincare have been shown to contain neurotoxins. Neurotoxins have the ability to damage the nervous system by forming a film of mineral oil on the surface of the skin blocking the skin’s natural respiration and ultimately clogging pores. The main risk of petrochemicals in products includes the presence of 1,4 dioxin, which is a contaminant that has been known to be toxic to the brain, respiratory system, and kidneys and is likely to contribute to many different cancers. This is just one of the reasons why petrochemicals in skin care products should be avoided. If you’re curious whether or not your beauty products contain petrochemicals check out your ingredient list for any of the following. If it contains one or more of these ingredients, your skin care products contain chemicals from natural gas or petroleum.

It is undeniable that we have made some major advances in medicine over the years. Unfortunately, however, it is quite arguable that our health as a society has also drastically decreased over the years, with conditions such as diabetes, cancer, heart disease, strokes, Alzheimer’s, and pulmonary and respiratory diseases becoming the norm, especially as we age. Many of these top fatal conditions have been linked to ingredients in and the consumption of many of the common products and foods that we utilize and consume. Is it a coincidence that many of these diseases were not prevalent pre-Rockefeller influence on medicine? We will leave that up to you to decide.

It is quite arguable that many of the changes that were implemented due to the 1910 Flexner Report were very beneficial for the advancement of medicine, and we have come a long way since the turn of the 20th century. However, it’s influence on removing homeopathic and natural remedies from the teachings of medical professionals, including those focused on the influence of our diet on our overall health, has been detrimental.

What has been classified as quackery, natural, holistic, or alternative medicines have been the very ones embraced successfully by cultures around the world for generations? This includes the use of essential oils from various plants and, in many cases, plants themselves. Here at Potency No. 710, we are firm believers in the power of nature and advocate for legal cannabis reform, but cannabis is not the only plant and herbs that have been kept from the people while their potential benefits have been suppressed. That is until modern times and the age of information accessibility. Today powers of nature are being embraced by many as they start to learn about the therapeutic benefits that many plants offer.

Unfortunately, many of the household brands that have been around since the turn of the 20th century continue to utilize synthetic and potentially harmful ingredients knowing the danger that the ingredients in their products present. Like Rockefeller, these companies have monopolized industries in order to increase their profits without concern for consumer health or safety. The research is very sound surrounding many of these ingredients, including petrochemicals that present such risks, yet they are prevalent in many of the foods and medicines we consume as well as the products we use in our daily life. Luckily, consumers are becoming more ingredient conscious and choosing to embrace commonly overlooked brands due to their natural and safe ingredients. And that is something we can get behind!

If you want to rest assured that you are utilizing skincare products that are free of petrochemicals and other harmful ingredients like the ones we cover in this article, check out the full line of hybrid plant-powered skincare products we offer at Potency No. 710.