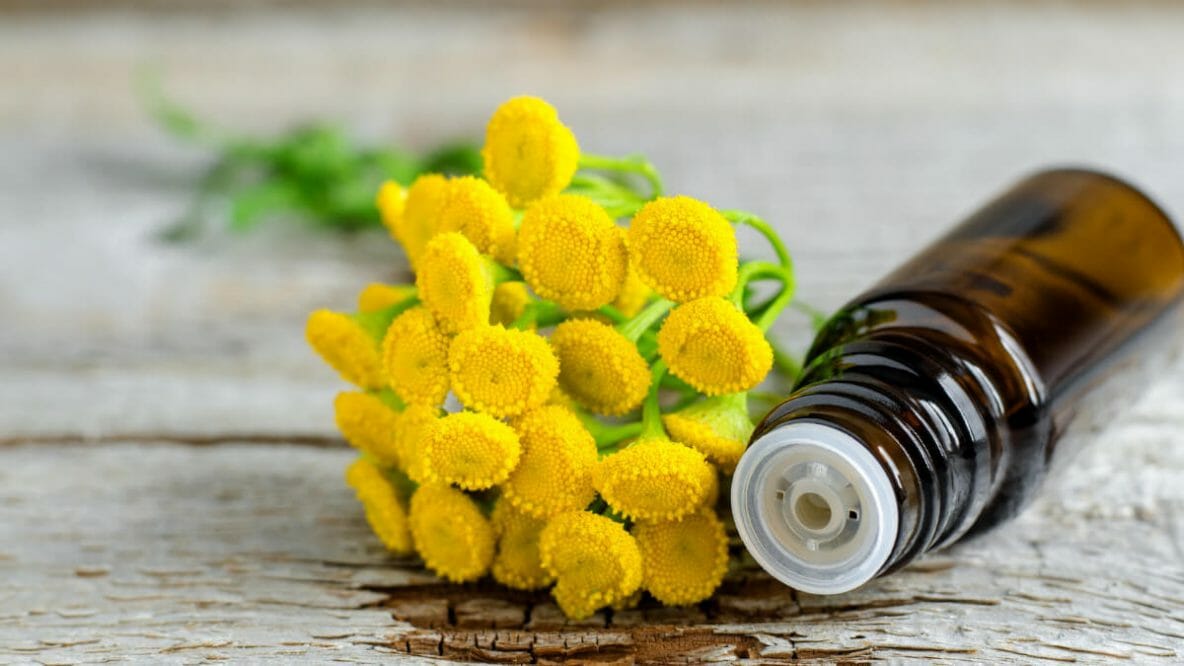 Here at Potency, it is widely known that we have a passion for powerful plant oils! Among our list of favorites is Blue Tansy! Due to its Moroccan origin, Blue Tansy comes from a plant known commonly as Moroccan Chamomile or Moroccan Tansy. This yellow-tinted plant is not only beautiful but also sustainable. The flowering plant is scientifically known as Tanacetum and falls within the same group of plant species as German and Roman Chamomile. Blue Tansy used to grow wild across the Mediterranean region. However, today it is most commonly cultivated in Morocco. This plant and the essential oil of Blue Tansy are used widely in various health and beauty products such as the Potency No. 710 Gold Serum, and for a good reason! Let’s explore!

The Terpenes Behind the Powers

Sabinene, a monoterpene, is a chemical component of Blue Tansy responsible for its antimicrobial and antifungal properties. Another terpene known as chamazulene is highly prevalent in Blue Tansy essential oil and is responsible for the anti-inflammatory and antioxidant properties it offers. Together these terpenes provide a powerhouse of potent potential for our bodies’ largest organ, our skin.

Camphor is another constituent of Blue Tansy that possesses unique abilities and properties. This terpene ketone, which occurs naturally in the plant can also be derived from the bark and wood of Cinnamomum, a large evergreen tree that grows mainly in East Asia. This compound has been shown to reduce inflammation, the underlying factor of many skin conditions and issues. In one study, this compound was shown to repair skin damage caused by UV radiation, leading many researchers to the believe that it could also act as an anti-wrinkle agent and potent healing agent for wounds.

An Ingredient for Healthier Skin

So just what type of benefits does Blue Tansy offer for overall skin health? According to Deanne Mraz Robinson, MD, FAAD, a board-certified dermatologist, “by lowering inflammation and histamine (which can trigger inflammation), Blue Tansy can improve conditions with inflammatory associations, like acne breakouts, rosacea, eczema, psoriasis and more.”

Let’s take a closer look! Below is a list of some of the common effects that Blue Tansy produces when utilized topically.

Blue Tansy’s ability to kill bacteria and to clear congested pores makes it a prime candidate for relieving acne-prone skin. For those with skin conditions such as rosacea and eczema, this ingredient’s ability to reduce heat and redness is essential for relief. While you primarily find this ingredient in topical skincare products, it is also commonly found in shampoos and conditioners as it provides significant relief for dry, itchy scalps. Additionally, many radiologists utilize a spritzer bottle with Blue Tansy and water to help relieve the discomfort of burns due to cancer radiation treatments. The antifungal properties of this plant are revered for their ability to fight off fungi that cause skin infections such as scabies, psoriasis, and dermatitis, to name a few.

Aside from skincare applications, this potent ingredient offers many other benefits to our health, both physically and mentally. The anti-inflammatory properties of this essential oil are great for our entire anatomy. The aromatherapy application of this oil, however, reaches deep. For many years, this compound has been rooted in traditional Chinese medicine, commonly being utilized aromatically to relieve congestion as it offers potent antihistamine properties.

Its potent ability to neutralize histamines also allows it to help mitigate several allergens making it an anti-allergenic compound as well! Its antifungal and antibacterial properties are not only good for the skin but are also being researched as an alternative to traditional antifungal therapies which commonly come with a severe list of adverse side effect potentials, including the toxicity of the liver. This is leading many to researching natural alternatives. Additionally, this ingredient has been found to repel insects, boost mood, and relieve sunburnt skin. So next time you are using a Blue Tansy product, be sure to take in a deep breath!

Like many essential oils, Blue Tansy should not be ingested. The essential oil can be diffused for its aromatic properties. However, the most common way of utilizing this ingredient for all that it beholds is through topical products such as the Potency No. 710 Gold Serum.