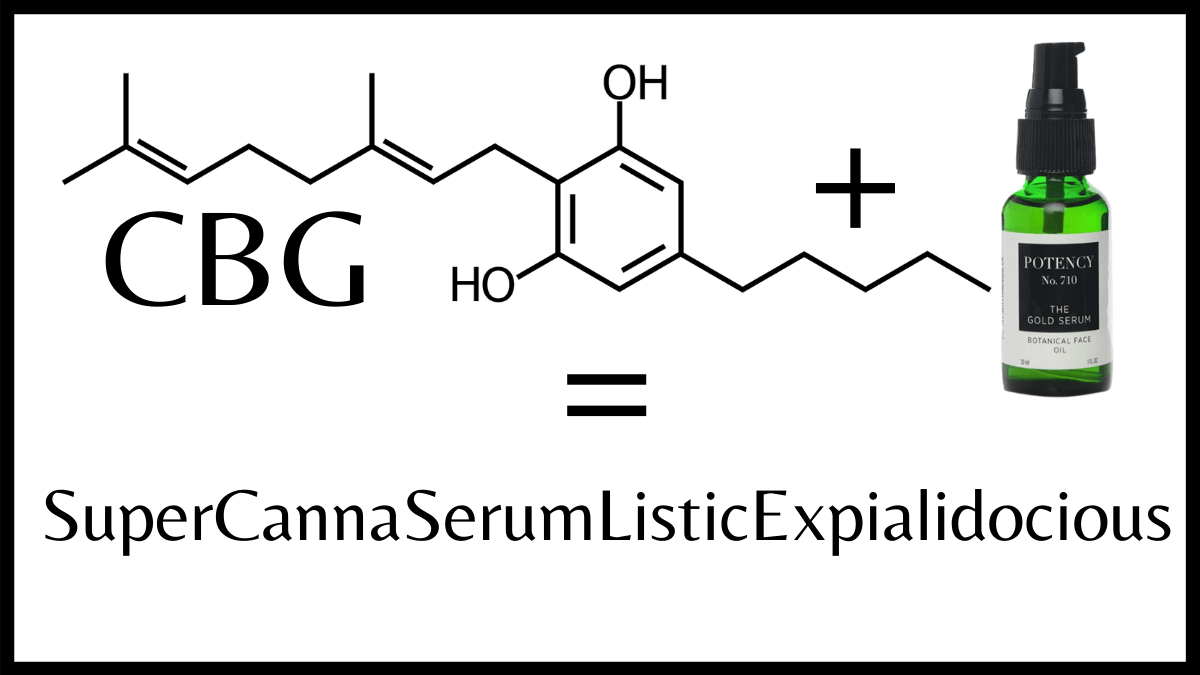 By now you have likely heard about the amazing benefits that CBD stands to offer our skin and overall health! If you have tried Potency products in the past, it is likely that you have seen the results this cannabinoid can offer firsthand. If not, check out our testimonials or the before & after photos on our social pages and prepare to be amazed!

Aside from CBD there is a lesser known cannabinoid that stands to disrupt the beauty scene by the name of CBG.

CBG is typically present in very small amounts within dried cannabis, Cannabigerolic acid or CBGA, the acidic version of CBG is, however, essential to the makeup of cannabis as we know it. CBGA plays a crucial role in the very creation of other cannabinoid lines including CBDA, THCA, and CBCA. It is often referred to as the “mother of all cannabinoids” or the “stemcell” cannabinoid.

CBGA does not exist in high concentrations in the cannabis plant because as it is broken down by enzymes it converts to one of the 3 main cannabinoid lines mentioned above. CBGA like other acidic versions of cannabinoids when exposed to heat or UV light it becomes its nonacidic counterpart, CBG.

What are the Benefits of CBG and How Does it Work with the Endocannabinoid System?

According to the Chief Growth Officer at EcoGen Laboratories, Derek Du Chesne,

While research is limited into the potential benefits of this cannabinoid line, what we do know based on science and anecdotal claims at this time is astonishing and sets the stage for CBG to go mainstream in many degrees.

So, the big question is… what can it do for my skin?

CBG offers a powerhouse of potential benefits for your skin thanks to its antioxidant, antibacterial, and antifungal properties.  This mother of all cannabinoids also possesses the superpower of moisture retention. As you may know, as we gracefully age into wisdom our lipid production decreases substantially leaving our skin weak and defenseless.

This inability to retain moisture, however, is something that CBG can easily combat. This cannabinoid has been found to have a substantial ability to help our skin cells to retain moisture and combat the signs of aging through its ability to strengthen our sebaceous gland by increasing and maintaining lipid synthesis.

In a study from 2018, researchers found that CBG indicates a stronger binding affinity to CB2 receptors in comparison to CB1. According to research, both of these receptors are found throughout the epidermis, sebaceous glands, and hair follicles “distributed in a complementary fashion’.

CB2 receptors, however, are the golden star of cannabinoids and skin care as they work directly with inflammation in the body. Inflammation is at the root of almost every major skin disease and condition. This means that CBG could revolutionize dermatology and the treatment of skin conditions even further in the future.

Forbes reports that in “2018 The National Center for Complementary and Integrative Health (NCCIH) announced an intent to research minor cannabinoids including CBG that could help manage pain.” This cannabinoid which is also sometimes referred to as the Rolls Royce of cannabinoids stands apart in many ways from other cannabinoids.

Aside from its essential role in the creation of other cannabinoid lines and ability to intensely bind to the CB2 receptors throughout the endocannabinoid, this cannabinoid is also much different to extract from the cannabis plant species.

Let’s take a closer look at how the wizards of extraction are able to extract CBG from the plant, a process which makes it one of the most expensive cannabinoids to obtain.

The Cost of Extracting CBG

CBG is present in concentrations of roughly 1% in most cannabis and hemp strains. CBD on the other hand is available in some cultivars in concentrations as high as 20%. When it comes to extraction, it means that you will need roughly 20 times the amount of biomass product to extract the same quantity of CBG in comparison to CBD.

The only way to obtain higher concentrations of CBG means sacrificing the entire crop for extracting CBG only. Levels of CBG are highest in the plant early in the vegetative cycle meaning you must harvest prematurely in order to obtain the most CBG possible from the plant.

Another aspect that adds to the cost for extracting this valuable cannabinoid is the cost of the equipment needed to perform the process known as chromatography. While there are some other more cost effective methods for extraction, the only way costs for extraction will truly ever lower is if breeders are able to develop new strains bred specifically for higher CBG content, similar to what we have seen with CBD in recent years as consumer demand has increased.

Potency No. 710 loves the power of plants and sharing them with you. While we always have your best interest and health in mind, we cannot make any specific claims regarding the benefits of our products to your health. Additionally, we cannot attempt to cure, diagnose, treat, or prevent any disease.

We can, however, share the science of this amazing plant and all it has to offer with you as well as our formulations which are 100% plant powered and purpose driven. The proof is in the results and with the addition of CBG coming to our Gold Serum this year, we cannot wait to see the true superpowers of this plant and product come to light.