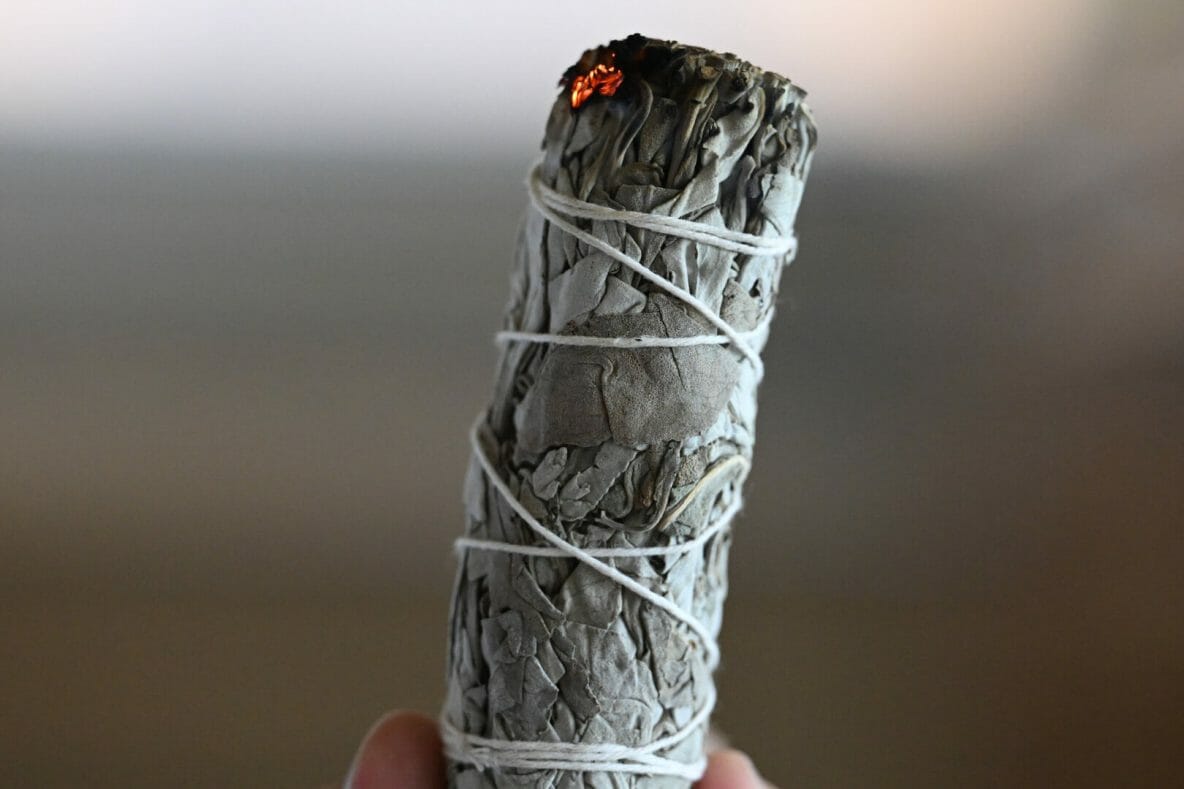 If you have ever received one of the infamous golden packages from Potency No. 710 it is likely that you have received a bundle of sage, a stick of Palo Santo, or perhaps both. While some are versed in the uses and benefits of these gifts, not everyone is familiar with what to do with them when received. We want to ensure that you are making the most out of these sacred plants so in this article, we will take a closer look at how sage should be utilized as well as its histories and benefits of use. We will also be covering these same aspects regarding Palo Santo in a future blog, so be sure to follow Potency on social media to know when that drops! Without further ado, let’s take a closer look at sage, the ritual of smudging, and the benefits of this ancient plant that has been embraced by cultures for centuries.

Sage is a perennial herb that comes in several varieties. The two most common are garden sage, which is used for culinary purposes, and white sage which is common burned as an incense or through smudging. Both offer a plethora of benefits, be it through ingestion or its aromatic properties.

Why Do People Smudge with Sage and What is the History Behind Smudging?

Smudging with sage, is the simple act of burning sage and is a spiritual ritual from ancient times that has been practiced by various cultures including many Native American tribes such as the Lakota. The act of smudging with sage can offer many benefits on physical, mental, and spiritual levels.

In many cultures, healers burn sage to help people better reflect and hopefully resolve spiritual dilemmas by helping them connect to the spiritual realm and in some cases to strengthen their own intuitions. Some types of sage such as white prairie sage and salvia sage are potent in a compound known as thujone which is also found in many other plants that have been used by cultures throughout history to enhance intuition.

What Are Some of the Benefits of Sage?

Many varieties of sage have been shown through research to offer antibacterial and antimicrobial properties meaning they help to fight viruses, fungi, and other infectious bacteria. This purifying aspect of sage is highly embraced through both the ingestion of edible sage and through smudging.

Sage has been shown to neutralize positive ions such as pet dander, dust, mold, and pollution through releasing negative ions. Properties such as this can be very valuable to those with respiratory conditions such as allergies, bronchitis, and asthma, however, these individuals should practice caution so as to not inhale any of the smoke when smudging.

In many cultures, white prairie sage has been a traditional treatment for relieving depression, anxiety, and other mood related disorders. This uplifting quality of sage is a direct link to the wide belief that smudging can lift one’s mood through the removal of negative energies.

How Do You Smudge with Sage?

Smudging with sage is simple and offers many potential benefits. Benefits such as the ability to dispel negative energy and cleansing or empowering specific objects. We have outlined everything you need to know below in order to get started and to successfully smudge your space!

What You Need to Get Started Smudging

How Do I Prepare to Smudge with Sage?

As with most things, preparation before smudging with sage is key to success. Before you set out to smudge with sage, it is essential that you open a window and allow it to stay open throughout the process to allow smoke and negative energies to leave the space. It is also highly advisable to remove all animals from the room.

Let’s Get to Smudging

Now that you have prepared the space and gathered the necessary items to smudge, it is time to get to smudging!

What are Other Benefits of Sage?

Among its many other benefits, sage has been shown to help sooth stress. According to a 2016 research project by the University of Mississippi, sage is rich in compounds that activate receptors in the brain that are responsible for reducing stress, alleviating pain, and elevating mood. When stress is reduced and moods are elevated it also tends to help one have a better night’s sleep. Some studies suggest that sage may ease insomnia, and not just through smudging and removing negative energy that could disrupt sleep patterns. Sage has also been shown to boost cognition which could offer promising benefits for dementia patients among others.

Smudging sage is an ancient tradition and should be respected as such. When embraced properly with the highest intentions it is believed that this ritual can lead to many great things including a space and energy that is free of negativity. Many times, sage is used in conjunction with another plant known in Spanish as Palo Santo, another common gift that Mandy here at Potency No. 710 is known for giving. Palo Santo is embraced for its ability to bring in the good. Stay tuned for our upcoming article covering Palo Santo and in the meantime,be sure to choose sage as an optional add-on at checkout with your next Potency No. 710 order to start clearing your space of negativity and preparing it for all the good things to come!