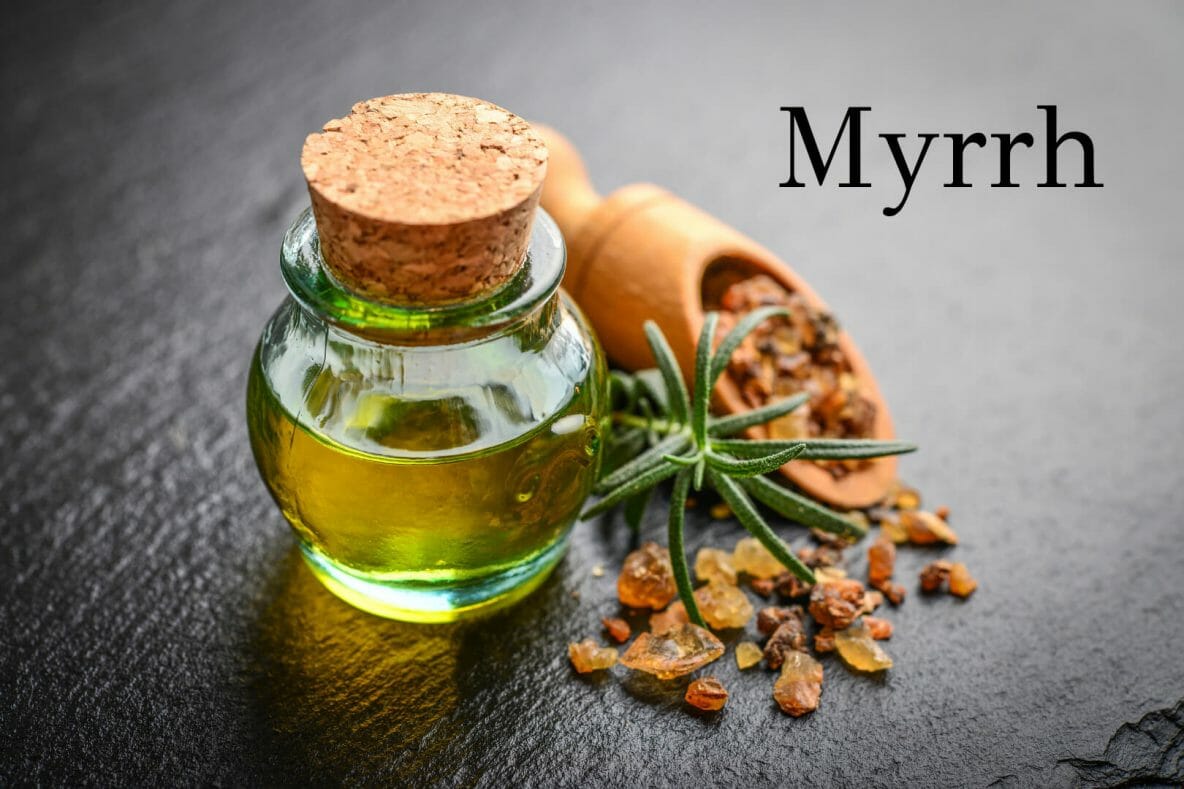 Myrrh is well known for being one of the gifts brought to Bethlehem on the eve of the birth of Jesus, according to Matthew 2:1-12, along with Frankincense and gold. Myrrh is extracted from the Commiphora Myrrha tree native to the Arabian Peninsula and Africa. More precisely, it is the resin made from the dried sap of the Commiphora Myrrha. Some ancient texts state that the resin was so valuable that it was literally worth its weight in gold.

Myrrh has been utilized for centuries internally, aromatically, and topically for various reasons. Most commonly, it is found in incense, health aids, and perfumes. The scent is often described as woody, bitter, sweet, spicy, sensual, and cooling, similar to pine or Frankincense. When burning the resin of myrrh, it offers a sweet and smoky aroma, whereas when it is diffused in essential oil form, it tends to have a more bitter and cooling fragrance.

According to The Perfume Society, “myrrh was among the very first perfume ingredients used in prayer – as well as perfumery itself:  as far back as 3,700 years ago, priests and believers believed that the smoke of incense was the only thing which could cross the barrier between earth and heaven.”

Benefits of Myrrh for Skin

In addition to its aromatic properties, this essential oil is a powerhouse for the skin! In fact, the essential oil of myrrh has been utilized in skincare formulations for many years. Traditionally, in Chinese medicine, regarding the skin, the oil has been used for minor irritations, athlete’s foot, and eczema. Many of the skin properties offered by myrrh are thanks to the terpenes it contains, such as limonene, curzerene, and germacrene.

The science is conclusive; myrrh is a potent skincare ingredient. A study from 2018 found that when myrrh was mixed with sandalwood oil, it was highly effective at killing microbes responsible for infecting skin wounds. Additionally, this study from 2016 found that myrrh essential oil alone could inhibit 43-61% of fungal growths that cause skin issues such as athlete’s foot and ringworm. This study also referenced the traditional use of the resin and its oil for treating skin infections and wounds. The effectiveness of this was confirmed in a 2017 study found here.

The anti-inflammatory properties of myrrh are one of the most powerful for taking care of the skin as many conditions are caused by underlying inflammatory issues, which can lead to reduced moisture, firmness, brightness, and more. The astringent properties also make it a powerful cleansing ingredient as it helps to pull oil and other irritants from the skin.

Other Benefits of Myrrh

This ingredient doesn’t just offer benefits for the skin. It has been scientifically proven to provide many different benefits when ingested or in aromatherapy. Some of the noted benefits of myrrh include but are not limited to the following!

A study from 2016 concluded that when myrrh was burned in conjunction with Frankincense, it reduced airborne bacteria by up to 68%, making it an excellent air purifier! Within the body, myrrh offers many benefits. Several studies have shown that its essential oil can fight infectious bacteria, including some drug-resistant varieties. Additionally, at a low dilution of 0.1%, myrrh has been shown to have the ability to kill dormant Lyme disease bacteria. This dormant bacteria sometimes exists after treatment and can continue to cause the illness.

One of the Newest Ingredients in the Potency Product Lineup

As you can see, myrrh is a powerhouse ingredient that offers a wide range of benefits. We knew it had to be part of the Higher Good formulation with all of the skin benefits it provides. Not only will you find myrrh in the Higher Good, but you can also find tonka, green tea, plant butters, and many other ingredients that you know and love from Potency products, including CBD and CBG in potent concentrations!